The Evolution of the Easter Hot Cross Bun 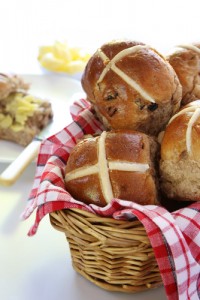 We may still be a few weeks out from Easter but you've probably already noticed hot cross buns appearing in your local bakery or grocery store. They are a traditional favourite of Easter, delicious to eat warm with butter and a cup of tea. Most of us assume that the cross on top links the buns to the Christian celebration of Good Friday and Easter Sunday, but is that the real origin of the hot cross bun?

Origins of the hot cross bun

You could technically trace the origins of hot cross buns as far back as Ancient Egypt. An excavation in the Roman city of Herculaneum unearthed two carbonised loaves with crosses on them and it is thought that the Egyptians offered these to their goddess of the moon. However, the cross itself were supposedly meant to resemble ox horns.

According to RecipeWise, marking baked goods with a cross was quite common even before Medieval times, where it was seen as a way to ward off evil spirits that might cause the bread to go stale or mouldy. So it wasn't just hot cross buns that always had crosses on them.

However, Christianity adopted the practice a little later. In her book Taste: The Story Of Britain Through Its Cooking (2007), Kate Colquhoun explains that Anglo-Saxons used to make small loves studded with dried fruits in honour of Eastre, the goddess of spring and fertility. As Christianity spread, monks appropriated the practice and began to put crosses on these loaves, and thus the earliest form of the hot cross bun was born.

So how did the hot cross bun become so integral to the religious side of Easter? Firstly, during the 1600s (under the influence of the Puritans, a movement within the Protestant Church of England), the practice of marking all baked goods with a cross was condemned as a Catholic behaviour and ceased. It was decided that marking baked goods with a cross would be reserved for only certain items and at certain times of the year. They decided that only bread, cakes and buns made on Good Friday could bear the cross in token of the crucifixion.

Today Puritans and Christians see the sign of the cross on hot cross buns as a way to commemorate the crucifixion of Jesus Christ. They also consider the spices used in hot cross buns to be significant. A Church of England spokesperson, Steve Jenkins, suggested that the particular spices were to represent those used when Jesus was wrapped in his tomb. There is a further connection between the buns and religion, as Good Friday and Easter Sunday are part of the Season of Lent, and hot cross buns have become part of Lent fasting.

Today, more traditional hot cross buns remain a spiced bun with dried fruit in them and you'll often find these types in stores, bakeries and cafes. Yet modern day buns tend to be a lot sweeter, use cream instead of water in the dough and are eaten hot with lots of butter!

You can make your own hot cross buns with this recipe from master baker Paul Hollywood. They use milk, butter and sugar, along with sultanas, apple, cinnamon and a touch of orange zest. The addition of an apricot jam glazing has made them a firm favourite among aspiring bakers!

In the lead up to Easter, you may have noticed some interesting varieties of hot cross buns around. Tesco's, a British food retailer that usually sells around 70 million hot cross buns over Easter, offers nine different varieties. There's toffee, orange and cranberry, and apple and cinnamon. And apparently us Australians have a penchant for having chocolate chip hot cross buns! If that sounds good to you, there's a good recipe here, along with vegan variations.

Other known hot cross bun flavours that can be found in Australia include mocha, sour cherry, fruit-free and gluten-free. Head to Adriano Zumbo's for an even sweeter take on the bakery treat – he dips hot cross cakes in chocolate, after filling them with cinnamon and raisin mousse, orange gel and a touch of bread and butter pudding. Or for a sense of the traditional, you could try the buns at Newtown's Black Star Pastry, which are glazed in frankincense – the scent will make you think you've stepped into a church! Whatever variety you prefer, get into the Easter spirit with some delicious hot cross buns.