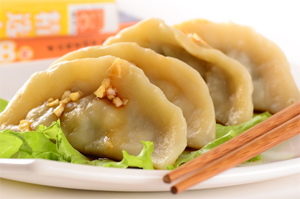 Chinese New Year is a massive celebration for Chinese people all around the world. The date, according to the lunar calendar, represents the end of winter and the start of spring. A big part of Chinese New Year is the feast people get together to share. The food traditionally eaten has a lot of symbolic importance to the Chinese that's tied into wishing one another well for the coming year.

Here are some of the main dishes to look out for this Chinese New Year on January 31, as the year of the horse arrives:

Also called long life noodles, these represent longevity. A tradition dating back to the Tang Dynasty, the noodles are not to be cut or broken during the process of preparing and cooking them. The longer the noodles are, the better.

The crescent shape of dumplings are said to symbolise family unity. They are often eaten right on midnight during the feast. This is because their name in Chinese, "jiao zi", also sounds similar to saying the hour of midnight.

This vegetarian dish is served up because of the number of ingredients used in cooking it. Buddha's Delight is made with 18 ingredients, and this number is considered lucky by the Chinese. Some common foods used in the dish include dried lily buds, mushrooms and bamboo shoots. Bamboo shoots are a good option because phonetically the Chinese word for them sounds like the phrase "wishing that all would be well".

Sweet cakes make for a sweet life, according to Chinese tradition. One variety, a sticky rice cake known as "nian gao", stands for both family togetherness because of its consistency and the new year because of the similarity in pronunciation to "year high".

To end the feast a whole fish is often brought to the table. Yet this dish is not for eating. Fish represent wealth and abundance, and is served as a hope for the new year. The fish should also have both its head and tail intact because this symbolises the entirety of a year.

If you're not much of a cook yourself but want to get in on the celebrations, why not visit one of our participating Chinese restaurants like Chin Chin's at Koto Moon or From Orient?