Weird and Wonderful Christmas Food Traditions From Around the World 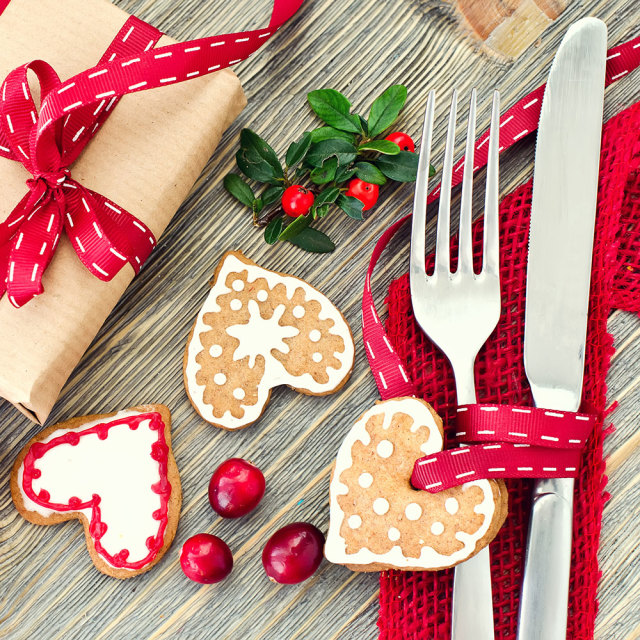 Christmas food traditions vary widely across the world and no two families sit down to the exact same meal. Each household has a different way of celebrating Christmas, and while some enjoy exchanging gifts, singing carols and drinking eggnog, others prefer to attend church, help in soup kitchens or skip Christmas altogether. Some tables are decorated with turkey and cranberry stuffing, while others are filled with tamales.

No matter what your Christmas plans are, it’s nice to imagine what someone on the other side of the world might be doing. At the end of the day, while the food in your tummy may be different, you’ve all sat down to celebrate the same thing and enjoy some time with your family.

A typical Australian Christmas dinner consists of cold ham and turkey, seafood, salads, trifle and pavlova to suit the summer warmth. This feast is served up on Christmas Day. To snack on, Aussies love nothing more than a delicious mince pie. Other treats include rum balls, gingerbread and Christmas pudding.

On Christmas Eve, the extended family join together for roast turkey stuffed with ground beef and peanuts and decorated with fresh slices of pineapple and cherries. The turkey is served with roast potatoes and apple sauce. After dinner Peruvians will get stuck into panettone and a cup of thick hot chocolate. 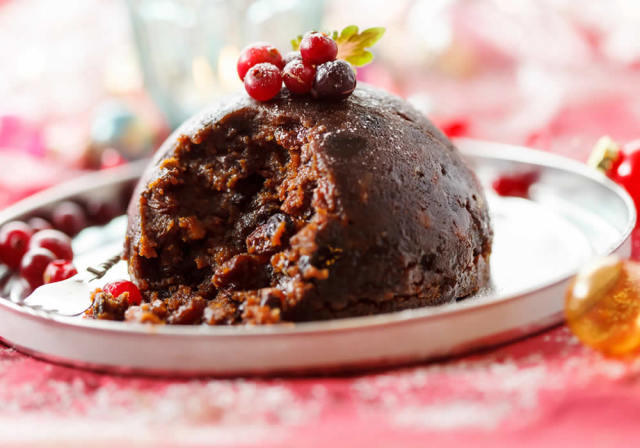 Christmas dinner in the UK is usually served around 3pm and consists of roast turkey, roast potatoes, brussel sprouts, pigs in blankets (chipolatas wrapped in bacon), stuffing and cranberry sauce. The meal is finished with plum pudding and brandy butter, in which a lucky penny can be found. When cooking the pudding, it is also customary for every member of the family to stir the mixture clockwise while making a wish.

Since Turkey is the mainstay for Thanksgiving dinner, many American’s choose to serve ham or roast beef instead at Christmas time. Sides generally include corn, pumpkin and green beans. For dessert, a pumpkin pie is usually served along with sugar cookies and mince pies. In regions with strong cultural heritage there are some variations.

There are plenty of local delicacies to be had at Christmas in Greenland including ‘mattak’, whale skin with a strip of blubber inside, and ‘kiviak’, raw flesh of auks (an arctic bird) which have been decomposing while buried in seal skin for several months. More palatable options include ‘suaasat’ (soup), barbecued caribou, fish, and Danish pastries. It is tradition for men to serve food to women on Christmas night, even stirring their meals for them. 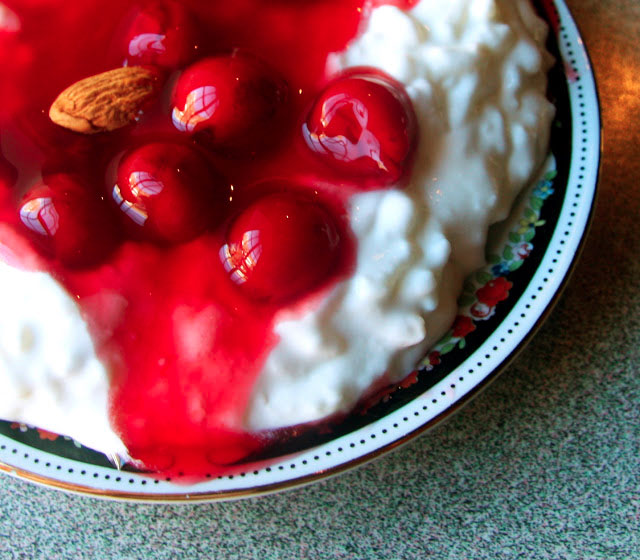 The Danes like to sit down to a meal of roast pork, goose or duck on Christmas Eve, which is served with potatoes, red cabbage, lots of gravy and an apple and prune stuffing. Dessert consists of rice pudding with hot cherry sauce and tradition states that one lucky person will find an almond inside their pudding.

In France and some other French-speaking countries, tradition is that on the eve before Christmas and New Year, friends and family gather together to enjoy a feast and stay up until midnight. Dishes served include foie gras, oysters, smoked salmon, turkey with chestnuts and “La Buche de Noel”, a cream Christmas log cake. Champagne is flowing and if you’re lucky enough to be in Provence, your meal will be followed by no less than 13 desserts.

The Finnish like to serve a “Joulupöytä”, which translates to “Christmas table”. The smorgasbord consists of many seasonal dishes, with the main dish being a Christmas ham served with mustard and bread. Fish is popular in most households, as are casseroles with liver and raisins, potatoes, rice and carrots. Families usually visit the graves of their ancestors on Christmas Eve, and even leave food on the table for the deceased to feast on when they come to visit. 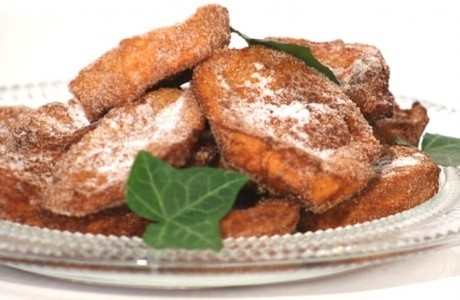 Similarly, in Portugal Christmas is a time for remembering the dead, and they lay places at their table for the souls of their lost loved ones. On Christmas Eve, a family dinner known as ‘Consoada’ is celebrated, and they generally refrain from eating meat. Traditional foods include codfish with green vegetables and boiled potatoes, as well as shellfish. For sweets, French Toast (called 'Rabanadas') is popular, as are fried dough desserts sprinkled with sugar and cinnamon called 'filhós'.

In Southern Italy and Italian-American regions, Christmas Eve is associated with the “Feast of the Seven Fishes”. A typical seafood feast will include anchovies, whiting, lobster, sardines, dried salt cod, squid and mussels. This is served with pasta, vegetables, fried kale patties and homemade wine.

Generally the Dutch tend to dine on almond paste bread (kerststol) and sliced meat for breakfast, before pulling out their gourmet set and cooking their own little meals such as fish and omelettes. The host will provide a range of chopped vegetables and meat which people can choose from. 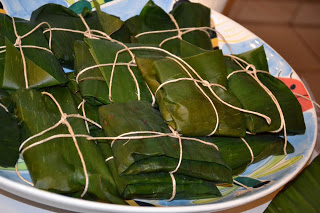 Lechon, or roast suckling pig, is a sacred food all over the island and no Christmas dinner is complete without it. Other dishes served include pasteles (pork wrapped in plantain leaves and paper), octopus salad and yellow rice with pigeon peas, capers, olives and ham. The meal is finished with a delicious coconut pudding.

Traditional dinner consists of duck, goose or rabbit, accompanied by apple and sausage stuffing, red cabbage and potato dumplings. Stollen is Germany’s widely known fruit cake that is now popular all over the world at Christmas, packed full of dried fruit, marzipan and covered with sugar.

In Ethiopia, no holiday meal is complete without Doro Wat, a slowly stewed dish of chicken and boiled eggs. The chicken is flavoured with chilli, garlic, berbere, cardamon and ginger and is served with soft injera bread. 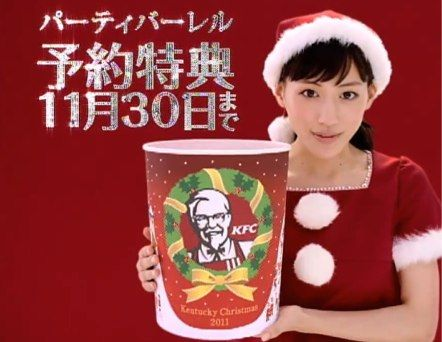 In 1974, KFC took advantage of the fact that turkey is not readily available and started advertising chicken for Christmas in Japan. The idea took off and it has become a real Japanese custom to eat at KFC for Christmas. This is the only country where the fast food outlet offers a set meal for Christmas (which includes cake and champagne along with the famous fried chicken). Even though it is ordered in advance, there are long lines waiting for the Colonel on Christmas Day.

On Christmas Eve the Greeks will indulge in sesame baklava before sitting down to a first course of egg-lemon chicken and rice soup on Christmas Day. Next up is stuffed cabbage, followed by the traditional pork. After dinner the Greeks will enjoy melomakarona cookies, spiced with cinnamon, cloves and orange.